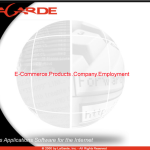 <- Snapshot from early LaGarde website
Bob LaGarde entered the technology arena in 1996, about a year after the phenomenal Netscape IPO.  He began programming in IDC/HTX, an old Microsoft methodology that is coincidentally somewhat like .NET with presentation layer and code behind architecture.  This was back in the day when CGI was the dominant method of making web pages do something.  The coolest stuff on the web was thought to be “eye-candy” things that blinked, spun or scrolled across the page.

A few artifacts from the scrapbook:

StoreFront99 Released – The Topeka Capital Journal (January 1999)Much like the 24-hour truck stop restaurant, the cyberspace shopping center is open, and buying products online is fast becoming a global addiction.  In Topeka this week, Bob LaGarde and LaGarde Inc. are staying ahead, by a mouse click, of its competition by releasing an enhanced version of StoreFront 99, its market-leading e-commerce development software.

E-commerce Vets Share Experience – The Topeka Capital Journal (August 2000)
The staff in Washburn University’s Division of Continuing Education didn’t want to make its upcoming conference on e-commerce just another series of sales pitches for online businesses.  Instead, they decided to bring in experienced veterans of the e-commerce world to share their experiences and entitled the Aug. 15 conference “The Business of E-Commerce: Lessons from the Trenches” sponsored by LaGarde, Inc and Washburn University.

Seminar Discusses Online Innovation – The Topeka Capital Journal (August 2000)
Bob LaGarde was one of several experts who spoke at Washburn University’s e-commerce conference Tuesday in Henderson Hall. The conference, the Business of E-Commerce: Lessons from the Trenches, attracted 95 participants. Other speakers were from Payless ShoeSource, eScout.com and Aleon Technologies.

Business Sells a Global Feel – The Topeka Capital Journal (April 2001)
Bob LaGarde has reached out from his office in Lawrence to provide e-commerce software to business owners in more than 70 countries.